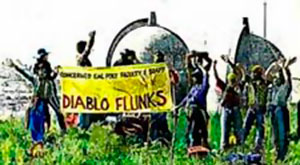 Filmed over five years by up to six camera crews, the film traces the history of nuclear power from Eisenhower’s “Atoms for Peace” (“this greatest of all destructive forces can be developed into a great boon for the development of mankind”) to the controversy over several Pacific Gas and Electric Company (PG&E) nuclear power plants.

The first was the proposed Bodega Bay nuclear plant (to be built next to the San Andreas earthquake fault) that spawned a robust citizen’s movement that organized opposition to the proposed plant over six years and prevailed: PG&E abandoned the proposed site (now “a $5 million duck pond”) and the six-year grassroots struggle gave birth and inspiration to the antinuclear power movement nationwide. 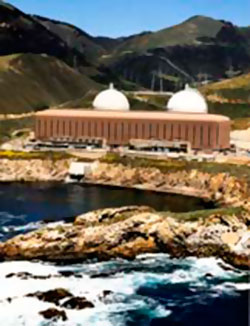 The film’s history continues with PG&E’s first nuclear power plant built on Humboldt Bay, California which was shut down after operating 13 years despite numerous safety problems and proximity to several active earthquake faults. The film also documents the first fatal nuclear accident at the SL-1 research reactor in Idaho, the historic Nuclear Safeguards Initiative (Proposition 15 in California) and the disastrous nuclear melt-down at the Three Mile Island Nuclear Power Plant in 1979.

The main focus of the documentary is the Diablo Canyon Nuclear Power plant near San Luis Obispo (called “both the most studied and the most dangerous nuclear plant in the country”) and the dynamic, grassroots protest movement—spearheaded by the Abalone Alliance and the Mothers for Peace—that rallied to oppose the opening of the embattled nuclear plant.

A QUESTION OF POWER takes us behind the scenes of the organizing meetings of the Abalone Alliance, to non-violence training, to the “back country” next to the nuclear plant, inside the plant with its hundreds of design flaws, and inside the Nuclear Regulatory Commission which was forced to withdraw the plant’s low-power license after the shocking revelation of the embarrassing design flaws. We see buses of anti-nuclear activists arriving to form a three week blockade at the Diablo Canyon gates in 1981, and hear musician Jackson Browne defending his civil disobedience at a San Luis Obispo courthouse after his arrest for trespassing at the blockade (“I consider my actions to be patriotic”).

We see families and children joining the blockade, and the jubilation felt by Abalone Alliance organizers when former Governor Jerry Brown endorsed their efforts to block the plant’s license. 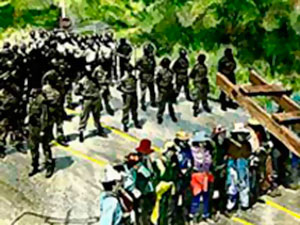 The documentary also features prominent pro-nuclear spokespeople including former Atomic Energy Commission Director Dixie Lee Ray, Nuclear Regulatory Commission chairman Nunzio Palladino and former PG&E board chairman Frederick W. Mielke, Jr. Plant workers are also featured praising the benefits of nuclear power: “It’s the cleanest, most environmentally benign form of electrical generation that we have. If I had the option, I’d build a house right here next to the plant.”

Despite the fact that the Diablo Canyon nuclear plant was granted its low-power license by the Nuclear Regulatory Commission in 1985, many activists agree with activist/author Harvey Wasserman (“Killing Our Own”) who states in the film that the success of the grassroots antinuclear movement in California can be measured by the fact that no new nuclear plants have been ordered since 1978 and that PG&E has become the country’s leading utility for conservation and renewable energy. “It seems that PG&E, along with all other utilities, has learned their lesson from the expensive mistake of nuclear power,” Wasserman said. He also states that the Abalone Alliance has been an inspirational model for grassroots organizing and non-violent resistance that has influenced two generations of social justice activists throughout the country. 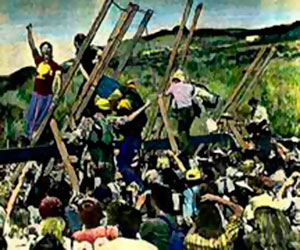 The Diablo Canyon struggle continued for over a decade as several groups fought the proposed PG&E rate hike to pay for the plant’s $5 billion dollar cost—a $4 billion cost overrun. California State Attorney General John Van de Kamp joined the Abalone Alliance to oppose the rate hike, stating, “If ever there was a case of excessive and unnecessary expenses, Diablo Canyon is such a case.”

In the film’s lightest moment, perennial hippie/activist Wavy Gravy reminds his fellow antinuclear protestors to lighten up in times of stress. “Laughter is like the valve on the pressure cooker,” he says, smiling through his clown make-up. “If you don’t learn to laugh, you end up with beans on the ceiling.” 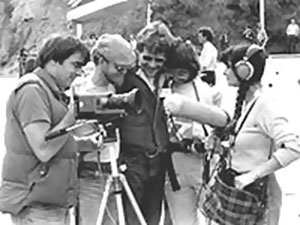 A QUESTION OF POWER was completed three weeks before the world’s worst nuclear accident at the Chernobyl Nuclear Power Plant in the Soviet Union, that sent a radioactive cloud over half the planet and killed thirty people within two weeks. The Ukraine Radiological Society estimates 2,500 deaths as a result of the nuclear accident.

A QUESTION OF POWER Credits

Critical Acclaim for A QUESTION OF POWER 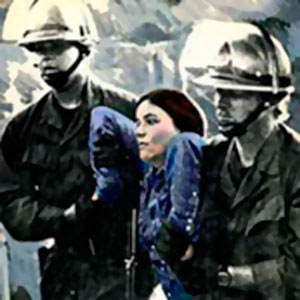 “A QUESTION OF POWER is one of the best and most definitive media histories of the antinuclear movement…It should be seen by everyone who cares about the Earth, about our legacy to the future and about effective techniques of social change.”

“A QUESTION OF POWER is the best documentary on nuclear power and citizen activism that I have seen. It is a paean to the power of true American democratic action.”

“In A QUESTION OF POWER, Brown gets his point of view over with bone-chilling efficiency…The documentary is an uplifting and spirited tribute to peaceful resistance.”

“The excellent documentary, A QUESTION OF POWER, provides a compelling portrait of people who, like Karen Silkwood, have faced the threat of nuclear technology and have shown the courage to act, to organize and to educate others. Made in the same spirit as our work at the Christic Institute, this film is a uniquely valuable educational tool for the safe energy movement.”

“A QUESTION OF POWER is a powerful, informative and very well-made documentary on the antinuclear power movement. It is one of the most effective and inspirational documentaries I have seen on the power of grassroots organizing. It should be seen by as large an audience as possible.” 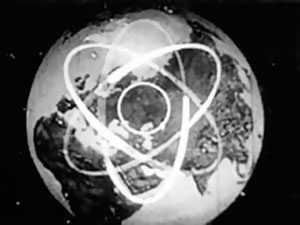 Harvey Wasserman, Activist, Author, Killing Our Own “A QUESTION OF POWER is a documentary that not only informs and frightens, but also excites and inspires. The film reminds us inescapably of what informed citizens can achieve together if they put their minds and bodies where their hearts are.”

“A QUESTION OF POWER is the most definitive film history yet on the antinuclear movement.”