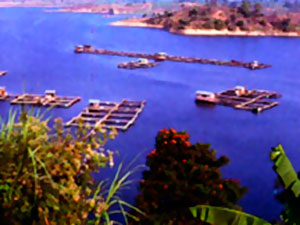 FARMING THE WATERS: JAVA’S BLUE REVOLUTION is an award-winning 25-minute video on aquaculture (fish-farming) in the reservoirs of Indonesia as a successful resettlement option for populations displaced by the water of large hydroelectric dams. Directed, photographed and edited by David L. Brown, the video documents how aquaculture in reservoirs in West Java, Indonesia produce over 10,000 tons of fish per year, improving the lives of thousands and creating numerous direct and indirect opportunities for rural people in impoverished areas.

FARMING THE WATERS tells the story of how a simple idea, growing fish in floating cages in hydro-power reservoirs, could point the way towards developing a major new global food resource as well as helping to address the social and environmental problems created by dams. Produced and written by marine biologist, Barry Costa-Pierce, the video focuses on the Saguling and Cirata hydro-power projects in West Java which affected the lives of over 100,000 people, causing serious hardship and social disruption as many thousands of farms and homes were inundated by water. The experiment in aquaculture, funded by the Indonesian government and The World Bank, produced over $10 million worth of fish each year and employed over 5,000 families. 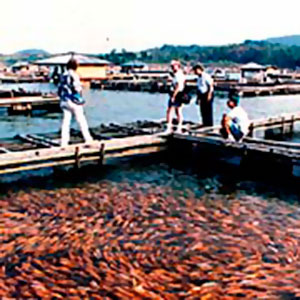 The video profiles several former rice farmers who have developed fish farming businesses in the floating fish cages, and features interviews with a variety of aquaculture experts who were involved in developing the aquaculture program in West Java. Among the issues addressed are the multiplier effects on the local economy in which it has been estimated that, for every direct job in fish farming, three jobs have been created in support industries such as the provision of feeds, fingerlings, supplies, equipment and transportation. The annual income from fish in the reservoirs has been estimated to exceed by over eight times the income lost from rice paddies flooded by the dams.

Experts interviewed in the video, however, emphasize that aquaculture is not a magic bullet that will solve all the problems of involuntary resettlement from hydro-power dams. At Saguling and Cirata, most of the displaced persons are not owners of the cages but are employed as workers; there are problems with water quality from lake turnovers and untreated industrial pollution; and there are 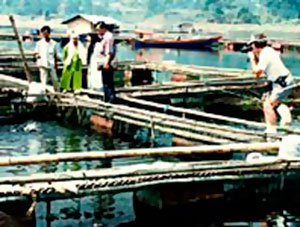 questions about the long-term sustainability of such feedlot types of cage aquaculture. In the two projects described in the video, not all of the villagers were included in the fisheries programs nor have all participants been successful. However, more and better jobs are available in a rural area of severe underemployment, and the reservoirs have brought tangible benefits to many of the people they most directly affected.

While capturing the unique beauty of West Java, FARMING THE WATERS includes footage of the complete cycle of aquaculture: from raising the fingerlings, to building the floating cages, to raising the fish in the cages, to distributing the fish to markets throughout the area, to restaurants where the fish is prepared and served. 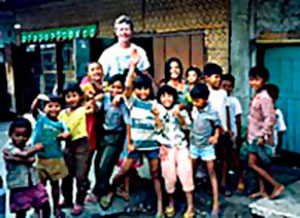 FARMING THE WATERS has been screened in a dozen countries including:
The University of Indonesia; the International Center for Living Aquatic Resources